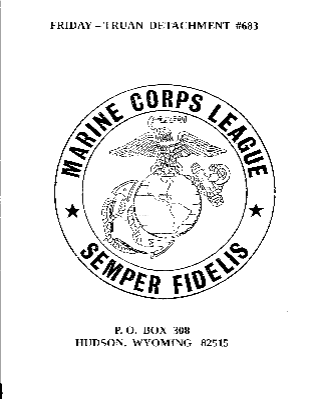 The Friday-Truan Detachment is so named to commemorate the names of Marine Cpl. Daniel Friday and Marine Sgt. Fritz Truan.

Cpl. Friday was born January 26, 1924 at Fort Washakie, Fremont County,  Wyoming. His gallentry in action, on Iwo Jima, during World War II earned him a Silver Star, a Bronze Star and a Purple Heart for an injury that cost him his right eye. Dan Friday resided in Arapahoe, Fremont County,  Wyoming until his death on January 29, 1981 in a hospital in Salt Lake City,, Utah. Daniel Friday was 57 years old.

Sgt. Fritz Truan was probably born in 1918 at Cody, Park County,  Wyoming. During his early adulthood, Fritz Truan enjoyed a degree of national fame as a professional rodeo cowboy. He earned the title of "World Champion Saddle Bronc Rider" for the years 1939 and 1940. Truan enlisted in the Marine Corps on December 7, 1942, and he died on the Iwo Jima battlefield during an operation generally referred to as the "Meat Grinder" on February 28, 1945. Sgt. Truan was 27 years old.

Their Commandant is Gene Sare.

The History and Mission of the Marine Corps League

The Marine Corps League was founded by Major General Commandant John A. Lejeune in 1933 and chartered by an act of Congress on August 4, 1937. Its membership of over 70,000 is composed of honorably discharged active-duty and reserve Marines, Fleet Marine Force Navy Corpsmen and Navy Chaplains who served with the Marines with 90 days of service or more, and retired Marines. It includes officer, enlisted, male and female members.

The Marine Corps League is headed by an elected National Commandant, with 14 elected national staff officers who serve as trustees. Day-to-day operations are under the control of an executive director, who also supervises the national headquarters staff located at 8626 Lee Highway in Fairfax, Virginia. He also has operational control ofver the National Board of Trustees, who in turn coordinate the efforts of 49 department, or state, entities and the activities of over 1100 community-based detachments located throughout the United States and overseas.

The League is classified as a veterans/military service organization and was formed for the purposes of promoting the interests of the U.S. Marine Corps; to provide camaraderie and assistance to Marines, as well as their widows and orphans;  and to preserve the traditions of the U.S. Marine Corps. It is a not-for-profit organization within the provisions of Internal Revenue Service COde 501 c (4), with a special group exemption letter which allows for contributions to the Marine Corps League, its Auxiliary and subsidiary units to be tax-deductible by the donor.